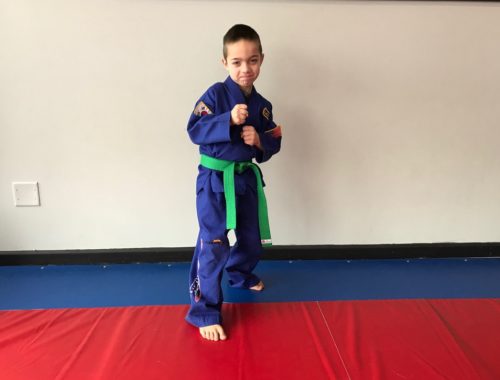 Jason is 6 years old and attends first grade. Jason, like many other kids his age, was faced with a bully that was being physically and verbally abusive to him and his friends daily. Jason used the mental and technical lessons learned at USA Martial Arts to stand up to the bully without being pulled into a physical altercation. He used his words to let the bully know he wasn’t going to take the abuse and told his friends to get behind him so he could protect them. The bully attempted to punch Jason, and Jason used his training to effectively block the attack. This frustrated the bully who turned and walked away. Jason told the bully to leave him and his friends alone, which he has.

This store for studio pickup only — no orders shall be shipped. Dismiss

We would love to hear from you!

Click "Allow" in the permission dialog. It usually appears under the address bar in the upper left side of the window. We respect your privacy.

Are you sure you want to start a new recording? Your current recording will be deleted.